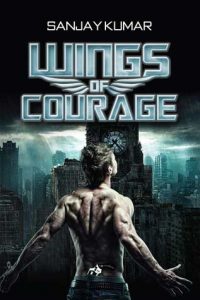 “Wings of Courage” as the name suggests is a story about courage. Whose courage? Yours and mine if we really decide to juice out something from it, beautifully portrayed through the protagonist Saksham. The story is about Saksham, a fairly rich boy, just when he was about to finish his graduation, undergoes a series of incidents and finds himself struggling between his love life, his career, and the socio-political condition of India. Three events that change his perspective of how he saw things around him and his decisions about his own life are:

This portion contains spoiler. Click to read…
1. Attending the classes of Dr. Sen after a notice that claimed that their absence would mean failing the exams. Through the classes Saksham begins thinking about the socio-political status of India in a serious manner. He feels an urge to bring about the change, but isn’t yet sure what to do. 2. He finds himself in a bus, where he and his friend Asif are forcibly disembarked. Later he comes to know that a girl they had met in the bus was raped and brutally injured. He wanted to testify against the crime but his father and his girlfriend, Divya, stops him from doing so. However, the guilt starts accumulating inside him. He starts indulging himself with NGOs as Dr Sen’s assignment that creates a distance between him and Divya, finally leading to their breakup. 3. He meets a road accident, where he is critically injured and goes into coma. And, then arrives the Almighty and gives him a life-extension for one year through an Angel named Korage. In the given year he completely dedicates his life with a purpose of living for others and making a change to the socio-economic status of India. With the help of a girl named Sneha and concealing himself as a poor boy he starts working for an NGO, later falling in love with her. When Sneha learn about him they have a little bit of conflict and Saksham decides to stay away from her. It is during that period he stops a robbery, for which he is offered a job in the Police, which he takes up.

The plot of the book isn’t unique but good and much needed all the same. It shows us the face of our society, its failing structure from top to the bottom. Sanjay has written most of the parts beautifully and there are many events and monologues that would inspire each of us. The characters had been well-formed, clear and to the task. The pace is good. And the way he has told the story is fantastic.[bctt tweet=”#BookReview – Wings of Courage, Author: Sanjay Kumar”]

However there are a few things that I couldn’t seem to take well. First of all, the blurb and cover page both raised the hopes and since I didn’t know the exact genre of the book before reading, I took it for a fantasy, or a science fiction. After reading a few pages my opinion changed and I began to take it as a realistic fiction that was dealing with socio-political topics. And, then, all of a sudden, the Intervention by Almighty took me off guard. That was truly unexpected and even unwanted in my opinion. Saksham was already heading in the right direction and I had no doubts the way he was progressing he’d start doing something heroic. Then why the Almighty? Especially when Almighty did nothing more than giving Saksham the task of learning certain things about the world and its problem. I believe Dr. Sen’s involvement was already sufficient for the same and this one wasn’t really needed. Now, I can’t figure out where exactly to put this book. It fails as a fantasy, it is not a science fiction, as I had thought before beginning. With the addition of Almighty I can’t seem to put it under realistic fiction too. Anyhow, that’s less of a concern, rest of the idea was great and I hope people would learn something from it. However, again, I don’t want them all to take up arms and go around killing politicians and rapists. A better way would be self-improvement. If each of us starts improving ourselves and take care not to do anything inhumane or anti-social, and also discourage others from doing so, then such extreme measures wouldn’t be needed. Nevertheless in absence of enough encouragement for people to go about making those changes, something solid and exemplary need to be done which Saksham did, something that would evoke the patriotism, unite the people and make them better humans.

Overall I’d like to give four points to the author’s efforts out of five. Five points for a good book, and minus one for those angles (book cover, blurb, and Almighty’s involvement) that failed me entirely.

[PS: I received this book as a Giveaway from the Author] BUY ON AMAZON BUY ON FLIPKART