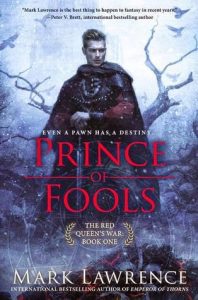 Just finished the book and I must say I enjoyed every bit of it. I’ll be looking forward to read the Second book in the series – The Liar’s Key

The story takes place in the Broken Empire and focuses on the adventures of Prince Jalan, a self-proclaimed liar, womanizer, coward and cheat, along with his companion Snorri Ver Snaggason. Who says courage is needed to be a hero? Jal is the Hero of Aral pass, Devil of the Aral pass to the enemies, and he doesn’t remember bit of a courage he might have displayed at the Pass. Anyhow, that is a thing of past, what matters to him now is how to get rid of a curse that has been laid upon him while escaping from a terrible fire at the Opera set up by the feared Silent Sister. While he is unwillingly attending an Opera organized by his father, he sees through the Silent Sister’s curse and tries to escape through it by putting a hole in it. While he is chased by two fissures of the witch’s curses he, along with Snorri, absorbs a part of the curse, setting them on a quest towards the north.

On their way to the Black Fort in the North they fight mercenaries, unborn, and dead people raised back. Through the journey Prince Jalan learns aspects of his own personality, discovers new powers growing in him and starts transforming into another person. Jalan makes new friends on the way, learns more about his companion Snorri and begins to develop a kind of attachment with him besides the bound there already was because of the curse. As the journey progresses they also unfolds the layers of the ongoing struggle throughout the Broken Empire controlled by the Dead King at one end, and the Red queen at the other, where he and Snorri are just pawns.

What can I say about the Author? The writing style is great, and he has done well to keep the readers interested throughout, addictive I must say. I really loved how he has presented the story through a first person POV, offering complete justice to the personality of The Prince of Fools, Prince Jalan. The way Jal thinks about himself, not only his strong inclination towards his traits of being a liar, cheat, and coward, but also how he finds himself oblivious of his own deeds if he has done anything other than those. Also, how Prince Jalan he has explained heroism and courage as another aspect of cowardice. It’s just great, something that only he and Mark could’ve done.

I completely recommend this book to all the readers of fantasy, especially to those who love the darker shades. And the previous Broken Empire trilogy, and the upcoming sequel—the Lair’s Key.