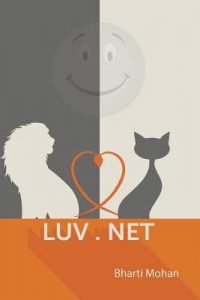 The plot is simple and straight out of the lives of most of us who lived their teenage/adolescent life between the period of year 2000-2010. Well, Ashu, out of curiosity, begin chatting experience as Junglecat through yahoo flirting chatrooms. After a series of desperate messages Junglecat finally finds a person with an ID Lionking. After that first half of the book continues in chat logs, which unfortunately adds nothing unique but what all the yahoo chatters have randomly experienced at one time or another. There were jokes and riddles, popular and copied from internet, nothing unique again, though it did bring up nostalgia. By the end of first half Lionking is shown almost in love with Junglecat, and then comes up a twist.

Both of them had exchanged their sexualities (somehow I knew that was coming, so wasn’t much of a twist for me). And then follows disaster of a story. Though it was pretty much ordinary I could fathom the first half, but second half skipped me entirely. It was as if the whole story was rigged and whatever happened it happened because it was supposed to happen. Author was neither creative in narrating, nor creating in building the plot. Why both of their real life lovers had to be bastards & bitches? I mean that was no fun at all, creating mean characters because you want to create some odd scenes? I found it impossible to attach to any of the characters even for a moment. I also wonder why the President of Aggarwal community who is against inter-caste marriage would barely take five minutes to agree to go against his principles. If he was so open to the idea why did he have to resist even for that five minutes? And, if he had to resist why didn’t to take up a minimum of day or two, build more of a conflict for the protagonist to tackle, before accepting? I am not saying that it is unreal, but I am saying that it is too unreal for a good story. A good plot requires a good conflict, not that conflict is as soft as butter against knife (and not the even frozen butter).

And I never knew that women can have orgasm just by a non-sexual chatting, or presence of a guy around or a light kiss. In fact, some years back the existence of female orgasms was a debatable topic. I agree that women can have multiple orgasms, but for each of them they need appropriate stimulation. Also, the portion involving character named Ruby skipped me too. Was the author trying to justify that a guy (whop is actually a girl) having sexual talks with Ruby was alright, but Ruby doing the same wasn’t alright. In my opinion, if that sexual talk was faulty, they were both at fault, and equally. Also, Ashu was at fault too, because I don’t see why I wouldn’t call their chatting sexual. Anyhow, I would say that it is Author’s own opinion and he has every right, and I have my own right to find it biased.

Next, let’s talk about the prose, author’s language and style. Style is too weak, almost no creativity at all. It seemed as if I was reading through a copy paste of someone’s chatlogs. Alright may be what I am saying is relevant to the first half only, but that makes the second part even more ridiculous. Whatever happened to a writer needing to describe things in details, adding emotions through words, creating scenes through actions and not by telling? In fact, I would have loved it more if the Author had actually done a bit of detailing through ‘telling’ also. Language was simple, and not without errors. If first half was reading through chatlogs, second half was as if reading through the diary of a twelve year old kid.

I think I would leave at that, and save myself the trouble of adding more criticism. In truth I wanted to leave the book right when I was at chapter one, but I continued further ahead only so I could atleast add another review the book’s profile (even if negative) for the Author’s marketing effort by giving away free ebooks (I wonder if he is regretting doing that already, though). I would recommend the book to those who doesn’t care about language, and can read anything that is given to them, and like to read chatlogs.