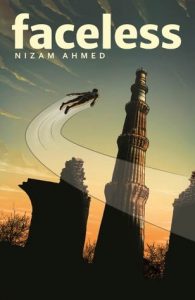 I received the book from the Author through Goodreads’ giveaway. At first I was pretty excited to read the book since superhero stuff has always fascinated me. Also, the blurb had my expectations raised. However, I don’t think that actual book was anywhere up to my anticipations.

First of all, the name ‘faceless’ could have been a great name, if it was significant to the story in any way. I’d assume either it was the author’s confusion about picking up a name and he went for faceless, or he wanted to correlate the three facts that Kabir himself was confused about naming his alter ego, kept his face hidden behind a mask, and the author wanted to emphasize on the fact that he uses facebook as a weapon (facebook/faceless, similar words and similar fonts too, ring any bells?). Truly speaking after reading through the whole story I wasn’t at all convinced with the name, faceless. It might’ve made a better sense if Kabir had actually chosen faceless as his superhero name, instead of Rivaan.

Anyhow, moving further ahead, the blurb tells us that it is a story of a boy named Kabir who discovers he has superpowers, just when he had taken the final step at killing himself. Now what was truly disappointing were: mathematical manipulations at flying and use of facebook as a weapon. First of all, why fly? Why cannot he teleport? Secondly, I never figured out what was the mathematics behind it. It was a manipulation, no doubt, but nothing mathematical in my opinion. I also find it a little awkward, that the hero has to waste a lot of resources at just flying when it’s not really necessary. Now I’m not sure how much energy is required to teleport once, but he was mostly short of energy to teleport in difficult situations. And all he needed was one more teleport in those crucial times which he certainly couldn’t do. Now, let’s assume if he used 10 frames per second for a smooth flying over two yards, even for mildly distant travels how many times he’d have appeared and disappeared? And, then, he fails just when he needed to do that thing just once which he had done zillions times already. Such a waste of resources. Also, he used facebook as publicity, no doubts, but I do not see him using facebook as a weapon. May be in the sequel he does that.[bctt tweet=”#BookReview: Faceless Author: @NizamAhmed “]

Moving on to the actual storyline, firstly, the story was nothing unique. It has been a copy and paste from too many places. Overall, the plot resembles the spiderman, batman and ‘Jumper’. Name of one of the villain arrives from the Indian movie Kick—Anant Surya to Asurya to Devil, who finds kick in kidnapping, contrasting to the Devil Lal of Kick naming himself as Devil looking for Kick in stealing money for helping children. I am not saying that overlapping of ideas with other superhero stories could have been avoided entirely, but they didn’t need to be so obvious. The author should’ve spent a little more time in finding some creative and interesting ideas. Superheroes have always fascinated both the readers and viewers (of movies and television series). And, we DO see some new ideas arriving every now and then. So, I would’ve liked if there was a little more imagination, innovation and originality involved.

I also wondered how the love story angle used in this book could be realistic. I couldn’t find myself getting attached to that part of the story at all. The characterization was loose and weak. Nat, for instance, falls in love with a guy, who seems completely average, and have only a few irrelevant interactions sparse over a period of months. Going by the psychology of Indian males and females, it is completely understandable for a guy to fall for a girl at first sight. However, for the girl to have a really weird first impression of the boy, and then nothing ever done to rebuild that impression, and yet she falls for him? Why? Author never showed anything in the story that makes this love from the girl’s side understandable. Ok, let’s say this was an exceptional case. Then, when the guy seems to show no reciprocation, while the girl is showering enough signs for him to believe she loves him too, the guy doesn’t do anything. I have two questions at that stage. Why the girl continues to love him? Second, why the guy seems to think he need to win her love, when it is the opposite, the girl needs to win his love and bring him out of his shell. Even with the Venky’s angle introduced Nat keeps giving him enough signs that she loves Kabir, while our protagonist is not ready to accept it. This angle of the storyline was full of flaws too in my opinion. It was as if the author wanted to give his protagonist a love interest and he did it without really working much on it.

Moving on to the corporate angle, all the elements were believable, only thing that was in my opinion acceptable in the entire storyline. The way he handles Aadesh in the end is done well. No complains whatsoever.

Next angle is the Riona’s introduction. If Kabir was Peter Parker, Nat was Mary Jane, Riona was Felicia. Don’t agree? Introduction of the character is fine, but another forced introduction of love? I wouldn’t say that it was hard for Riona to love Kabir, it clearly was more believable than Nat loving Kabir. But then why do it and bring your story towards the lives of other superheroes? Kabir is almost Peter Parker with a different power, job and nationality. Introduce one more love interest, let him steal massive sums of money and he’d pass for Bruce wayne too.

Now, talking about the writing style and language; it was far too simple and below expectations. There is quite a scope for improvement in the sequel, if author is really wont at it. There were also a lot of instances that needed good editing.

One thing that I loved about the story, though, is that the author has already set a good platform for the sequel and I believe it wouldn’t be a disappointment after receiving all the feedback about the first one. I am looking forward to a unique plot and better prose in the upcoming sequel.