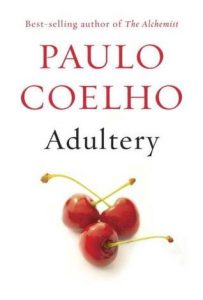 The story is about the Woman named Linda, in her thirties, weighing 150 pounds, five-eight-foot tall, who wears the best clothes money can buy. She agrees that she can evoke desire in men and envy in other women. She knows that she has a husband who is madly in love with her, besides being the owner of a huge investment fund and appearing in the Bilan Magazine’s list of three hundred richest people in Switzerland. She also has two children who are her reason for living. She enjoys her work as a journalist in a respectable newspaper.
She thinks that she has a perfect happy life, until she interviews a writer who tells her that he is not interested in a happy life, rather a life full of passion. Since then she finds herself in a conflict between the happy, perfect life she has, or a life she might have with a single change. She is fearful of the changes there might be, or the changes that may never be. And, a sadness and self-pity follows.

She throws herself into a relation, adultery, where she finds herself a remedy to her previous hollowness and self-pity, a sense of terror haunts her nonetheless. She decides that the break-in-routine she has found isn’t worth the risk she’d be put into if the truth is revealed.

Knowing that this book is written by Paulo Coelho, an author who has bestsellers like Alchemist under his belt, I found it a little disappointing. It wasn’t anywhere near the standards that he has set with his previous works. The book is average, lacks the intensity that was expected, and contains poor pornographic scenes. There is hardly anything truly exciting, rather sad and uninspiring.

Though, if we forget for a moment that the book is written by Paulo Coelho, it is a good book, that can easily find a way to bestseller’s shelf.
I would end this review with a hope that the master author would come back with a great masterpiece soon.