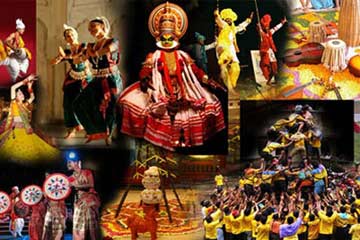 When we were children, in our schools we were made to cram essays on various topics. One of the topics was our country, India. It doesn’t matter who the teacher was, there was always a line in that essay—India is a land of culture, something that is unique and sets it apart from rest of the world. In those days I had seen nothing of India and other countries to have an opinion of mine, however, when someone needed to fortify that statement a certain set of examples were given. Some of those examples are:

Now that I have grown up and have more insight into these examples, I found it rather disappointing.

I now understand that why Indian women required (and, still require) those bulky clothes to hide their skin. Why, a little view skin even if it’s just a one inch patch at a girl’s shoulder is going to make the guys kinky enough for them to make cheap comments, assault, rape and even murder them. Moreover, in case of such an event it is the girl who is blamed for coming out of her house late in the night, or wearing a dress that revealed a tiny bit of their skin. So, what I understand from this is that, if India can claim to be proud of its no-skin-revealed-clothing it certainly is a facilitator of such tragic events. And, the culture is not those traditional dresses but the culture is Rapes. Yes, you heard it right, if I believe that India has a proud culture since its women wear those traditional dresses, I’d also have to agree that Rape is also the part of that proud culture.

Coming to the second point, Indians are friendlier than people in any other nation. I wonder if I could agree with that, even for half a moment. May be they are friendlier, may be. Then why do we have neighbors killing each other for matters as trivial as a child breaking the neighbor’s window glass while playing cricket? If we’re so friendly then why can’t we help a person who just met a road traffic accident and all he needs is someone who could take him to a hospital? Or, why can’t we take a stand for a woman when she is harassed in public by some goons? Or, why are we ready to backstab a friend for such things as a minor salary hike. I am not saying that these things happen only in India, but I am saying that these things always happen in India and even a single exception to these is such a big thing that it’s enough to make the major heading of the first page of newspaper. So, there is barely a truth in this statement, and yet we’re proud?

Indians know how to respect elders and women. Women??? I’d assume I do not have to tell you any more about that. How respected women are in India that doesn’t need my testimony. Slap! Slap in the face of Indian culture! And elders. Well, yeah, I agree that in India a 14 year child doesn’t stop living with their parents and meet only on a few occasions. But is it out of respect that Indian children live with their parents? No. First in India no child is ready to take a waiter’s job in McDonald’s to pay for his/her fees, so they have no option but to stick with their parents. Second, they still need their name is the parent’s will. Now, how many of them really make will? Too few. Why? Because by the time those children are grown up to have children of their own, they have had their hands on everything that their parents once owned. And, after that those poor parents becomes servants in their own house. Well, I am not saying that this happens in all cases. Because there are other cases where son murders his parents to inherit everything they owned, and most times their brothers too. And suppose the parents never had much to give the children other than their love, in the end they’d forced to give their free servitude in their children’s household. Thankfully there are still children who do give respect to their elders, but is that amount any greater than those in any other nation? I don’t think so.

There are many more similar stories where society went against love, and never let the lovers meet. Though the stories gained popularity lovers never gained each other’s love on earth, may be in afterlife they were together. Until now people were against love marriages and lovers were separated or killed. Though situation is improving a little now, but honor (horror) killing continues and more and more lovers are killed each day. Panchayats, society and parents (literate and illiterate alike) turning themselves into greatest villains. So love is part of Indian culture? Nah!!! Love only makes stories in India not reality.

Now, moving on to the number of festivals and religions in India. I agree India do have some great festivals, Holi, Diwali, Eid being some of the major ones. Do you know how many people die on Holi and Diwali? Well, these two days are the busiest days of the calendar in hospitals. Can you think why? Of course, if there are terror attacks or religious riots that might cross the number of casualties. However, do you have a hint why are there terrorist attacks or religious riots? I guess it’s because we have too many religions to create disparity amongst each other. Rather than being a medium to find spiritual enlightenment, religion has become a reason to hate. Should we be proud of hosting largest number of religions or should we be shameful of having largest number of religious riots?

At last proud of being a beautiful land? We might have had a beautiful nation once, but now we take pride in littering our garbage everywhere we can. People take piss wherever they want. They spit all over the nation like they were born to spit, especially the pan eaters. Toilets are still a dream for a huge section of population. Delhi and Mumbai, two most developed cities of India, rank amongst dirtiest cities of the world.

Kudos to the culture!

Though, it is not India as a nation that is to be blamed but the Indians who are responsible for deteriorating the conditions in India. It is our responsibility to make this Nation great and proud, and not the Nation’s responsibility to make us great and proud. I might be biased to only show the bad parts of our culture, and trust me there are some good things too, like so many dance forms, ayurveda, yoga, our languages, our cuisines our monuments, our scientists, our bollywood and a lot of other things. All we need to do is get rid of those bad ones first, so that when an outsider view us, they see us are the greatest country and not as a country to be despised. Slap! Slap! Wake up Indians. Let’s make our culture greatest, this time for good.